The opening of the exhibition “Francis Bacon, Lucian Freud, and the School of London” at Pushkin State Museum in Moscow gave me a brilliant opportunity to interview curator of Modern and Contemporary British Art at the Tate Britain Elena Crippa about the School of London. The artists of this group are highly demanded in the art market.

This term – “School of London” – adopted by R. B. Kitaj in 1976 to refer to the many outstanding artists based in London who drew and painted the human figure – has often been applied to a small group of six painters: Frank Auerbach, Francis Bacon, R. B. Kitaj, Leon Kossoff, Lucian Freud, and Michael Andrews.

Did the London school have a manifesto and ideas in common, like the artistic group of the past, such as, for example, the “Wanderers” in Russia? Why, in the era of domination of abstract and conceptual art, did the School of London return to figurative painting?

The artists of School of London as well as their teachers David Bomberg and William Coldstream wanted to regain a sense of the stronger attachement to the reality. Possibly, the abstraction is gone too far and became too subjective. They wanted to root back the attention into individuals and situations that were really enclosed them. Bomberg and Coldstream started to draw a painting from life. They painted the friends and relatives alongside with landscapes and cityscapes that were in their area where they lived. They became very important teachers of the reality that became again very strong following the postwar existential period. Francis Bacon was a leading figure who captured the vitality and the struggle of the human existence. I would say that all the artists and the exhibition are very much linked to the historical moment by their drive, the sense of the responding to the urgency of the trauma, by the desire to pin down reality and make it felt and recreated in a very intensified way. For example, in this picture there is a desire to overcome the reality and struggle (R. B. Kitaj “The Wedding”, 1989-1993).

Each artist is developping his own particular painting style. They are united by the desire to paint something that is very close and intimate to them in the way that not just representing it but in the way to recreate it giving them the sense of the physical presence. The way to achieve this result was also very personal.

Could you tell more about their style?

For example, in Frank Auerbach’s painting “To the studios” (1990-1991) there is always the sense of really close structuring and something solid, a sort of dramatical implant. If you look at the building in this particular painting, you would have a feeling to being immersed into the matter of this buildings. Leon Kossof’s paintings are more about the mouvement. He has always very clear, bright and shining colors alongside with very energetic brushwork. Some of the painters were using the impasto technique. They all have different artistic style. They painted also the different subjects that they were surrounded.

Which relationships does the School of London have with the great masters of the past?

If you look at specific painting, you’ll recognize Picasso, Cézanne, Chagall, etc. Kitaj said when he painted “The Wedding”, he was thinking about Picasso  “Les Demoiselles d’Avignon”. The human body expresses the vitality of life. Bacon started painting his grotesque figures looking at Picasso’s work of 1919-1921. This forms are very synthetic. In Paula Rego work (an artist of late generation of the School of London) you can see a lot from Goya, particularly, in her “Dance”, 1988. You can see at some portraits the influence of Rembrandt who was hugely important to many of them.

You may know Russian artist David Burliuk. He reminded me some of Francis Bacon’s work. Do you think if Bacon could be aware of Burliuk’s work?

It is a good question. We don’t know of this connection. The only Russian connection that we know it came of filmmaker Sergei Eisenstein. Bacon used a lot of films from him. They may be connected by the knowledge of Picasso work or some friends in common.

In cooperation with the Tate (London), the Pushkin State Museum presents the exhibition “Francis Bacon, Lucian Freud, and the School of London” in Moscow until 19 May 2019. For the first time, the Russian public will have the chance to get acquainted with a unique and very important chapter in the history of modern British art and explore the legacy of artists who used figurative painting to express their deeply personal, sensual and intense life experience. The exposition includes 80 paintings and graphical artworks from the Tate. VTB Bank is the general sponsor of the exhibition. 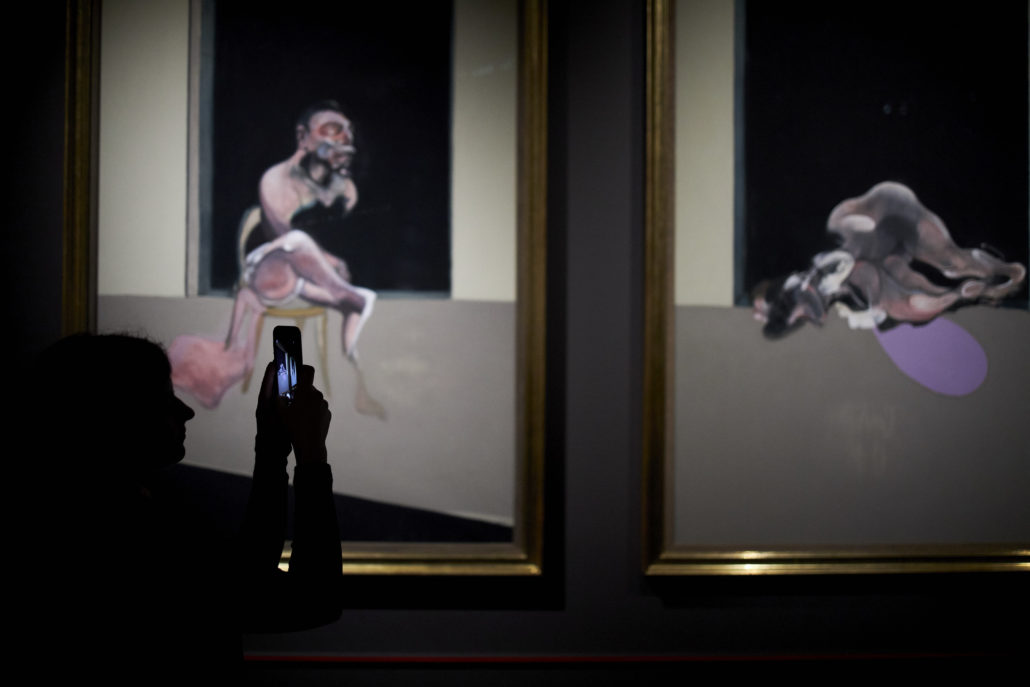